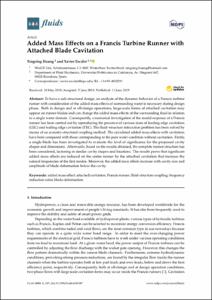 Except where otherwise noted, content on this work is licensed under a Creative Commons license : Attribution-NonCommercial-NoDerivs 3.0 Spain
Abstract
To have a safe structural design, an analysis of the dynamic behavior of a Francis turbine runner with consideration of the added mass e ects of surrounding water is necessary during design phase. Both in design and at o -design operations, large-scale forms of attached cavitation may appear on runner blades and can change the added mass e ects of the surrounding fluid in relation to a single water domain. Consequently, a numerical investigation of the modal response of a Francis runner has been carried out by reproducing the presence of various sizes of leading edge cavitation (LEC) and trailing edge cavitation (TEC). The fluid–structure interaction problem has been solved by means of an acoustic-structural coupling method. The calculated added mass e ects with cavitation have been compared with those corresponding to the pure water condition without cavitation. Firstly, a single blade has been investigated to evaluate the level of significance for the proposed cavity shapes and dimensions. Afterwards, based on the results obtained, the complete runner structure has been considered, factoring in similar cavity shapes and locations. The results prove that significant added mass e ects are induced on the entire runner by the attached cavitation that increase the natural frequencies of the first modes. Moreover, the added mass e ects increase with cavity size and amplitude of blade deformation below the cavity.
CitationHuang , X.; Escaler, X. Added mass effects on a Francis turbine runner with attached blade cavitation. "Fluids", 11 Juny 2019, vol. 4, núm. 2, p. 107-1-107-19.
URIhttp://hdl.handle.net/2117/167922
DOI10.3390/fluids4020107
ISSN2311-5521
Publisher versionhttps://www.mdpi.com/2311-5521/4/2/107
Collections
Share: