Harmonic generation in the opaque region of GaAs: the role of the surface and magnetic nonlinearities 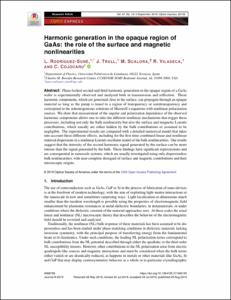 Document typeArticle
Rights accessOpen Access
Abstract
Phase-locked second and third harmonic generation in the opaque region of a GaAs wafer is experimentally observed and analyzed both in transmission and reflection. These harmonic components, which are generated close to the surface, can propagate through an opaque material as long as the pump is tuned to a region of transparency or semitransparency and correspond to the inhomogeneous solutions of Maxwell’s equations with nonlinear polarization sources. We show that measurement of the angular and polarization dependence of the observed harmonic components allows one to infer the different nonlinear mechanisms that trigger these processes, including not only the bulk nonlinearity but also the surface and magnetic Lorentz contributions, which usually are either hidden by the bulk contributions or assumed to be negligible. The experimental results are compared with a detailed numerical model that takes into account these different effects, including for the first time combined linear and nonlinear material dispersions in a nonlinear Lorentz oscillator model of the bulk nonlinearities. Our results suggest that the intensity of the second harmonic signal generated by the surface can be more intense than the signal generated by the bulk. These findings have significant repercussions and are consequential in nanoscale systems, which are usually investigated using only dispersionless bulk nonlinearities, with near-complete disregard of surface and magnetic contributions and their microscopic origins.
CitationRodriguez-Suné, L. [et al.]. Harmonic generation in the opaque region of GaAs: the role of the surface and magnetic nonlinearities. "Optics express", 29 Agost 2019, vol. 27, núm. 18, p. 26120-26130.
URIhttp://hdl.handle.net/2117/167921
DOI10.1364/OE.27.026120
ISSN1094-4087
Publisher versionhttps://www.osapublishing.org/oe/abstract.cfm?uri=oe-27-18-26120
Collections
Share: