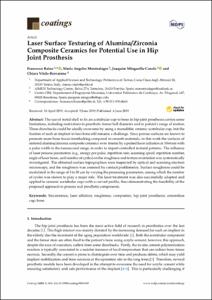 Vitale-Brovarone, Chiara
Document typeArticle
PublisherMultidisciplinary Digital Publishing Institute (MDPI)
Rights accessOpen Access
Abstract
The use of metal shell to fix an acetabular cup to bone in hip joint prosthesis carries some limitations, including restrictions in prosthetic femur ball diameter and in patient’s range of motion. These drawbacks could be ideally overcome by using a monolithic ceramic acetabular cup, but the fixation of such an implant to host bone still remains a challenge. Since porous surfaces are known to promote more bone tissue interlocking compared to smooth materials, in this work the surfaces of sintered alumina/zirconia composite ceramics were treated by a pulsed laser radiation at 1064 nm with a pulse width in the nanosecond range, in order to impart controlled textural patterns. The influence of laser process parameters (e.g., energy per pulse, repetition rate, scanning speed, repetition number, angle of laser beam, and number of cycles) on the roughness and texture orientation was systematically investigated. The obtained surface topographies were inspected by optical and scanning electron microscopy, and the roughness was assessed by contact profilometry. Surface roughness could be modulated in the range of 3 to 30 µm by varying the processing parameters, among which the number of cycles was shown to play a major role. The laser treatment was also successfully adapted and applied to ceramic acetabular cups with a curved profile, thus demonstrating the feasibility of the proposed approach to process real prosthetic components
CitationBaino, F. [et al.]. Laser surface texturing of alumina/zirconia composite ceramics for potential use in hip joint prosthesis. "Coatings", 6 Juny 2019, vol. 9, núm. 6, p. 369-1-369-15.
URIhttp://hdl.handle.net/2117/167920
DOI10.3390/coatings9060369
ISSN2079-6412
Publisher versionhttps://www.mdpi.com/journal/coatings/special_issues/surface_laser
Collections
Share: