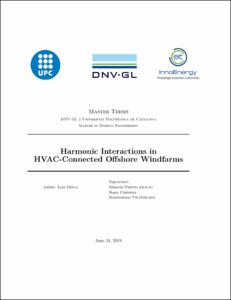 ; Cremers, Roger; Velitsikakis, Konstantinos
Document typeMaster thesis
Rights accessOpen Access
Abstract
The connection of new Offshore Wind Power Plants (OWPP) in the existing Dutch transmission system gives rise to many technical challenges. For example, it is expected that harmonic issues will occur more frequently when the number of large offshore wind farms increases. Cases have already been reported in which resonances were triggered in HVDC- or HVAC-connected OWPPs and the wind farms had to be taken out of operation. Recently developed offshore wind farms contain wind turbines which are connected to the system with a full-scale back-to-back Voltage Source Converter, which is responsible for inserting harmonics into the system. The onshore grid is also responsible for injecting harmonics. Since the wind turbine converter is an active element, where the control loops actively determine its electrical behaviour, it interacts with other converters and with the background harmonics inserted from the network. The initial harmonic emissions and the harmonic interactions can lead to an excitation of a resonance frequency. The cables, transformers, capacitor banks and filters are responsible for shifting the resonance frequencies. Especially a long HV export cable can strongly alter the resonance frequencies of the system. To analyze the impact of connecting an increasing amount of wind farms to the same Point of Connection on the harmonic emission levels, a Harmonic Impact Assessment was performed for three offshore wind farms in the Dutch North Sea. Since the wind turbine converters are active elements, its electrical behaviour can be captured with an equivalent impedance, or Norton Equivalent. This Norton Equivalent was utilized in the Harmonic Impact Assessment to include the active behaviour of the converter. When comparing this novel approach to the conventional methodology, the expected peaks in the Total Harmonic Distortion (THD) are shifted. When an increasing amount of wind farms is connected, peaks in the THD shifted to lower frequencies. Then, depending on the specific profile of the background harmonics and the impedance profiles of the grid and the OWPP, this translates into the disappearance of appearance of an exceedance of the emission limits. The effect of connecting two wind farms to the same Point of Connection instead of a single wind farm on the harmonic stability, was assessed. Frequency sweeps of the two assessed wind farms made clear that the presence of an additional filter in a wind farm leads to a small shift in the series resonance points. When multiple wind farms are connected instead of solely one wind farm, series resonance frequencies are shifted to lower frequencies and less damping appears to be present in the system. Lastly, the postive-net damping criteria was applied to assess the stability of a system in which a varying number of wind farms is connected. Time-domain simulations in PSCAD were performed to varify the results. It can be concluded that a system becomes less damped, and therefore less stable, when an increasing amount of wind farms is connected. This effect arises since the various wind farms are placed in parallel and the total resistance of the wind farms becomes smaller than the sum of the resistances of each wind farm. Moreover, when less wind turbines are in operation, less damping is present in the system since the resistance of a single OWPP is then decreased.
SubjectsOffshore wind power plants, Electric currents, Direct, High voltages, Parcs eòlics marins, Corrents continus, Alta tensió
Location
1
URIhttp://hdl.handle.net/2117/167861
Collections
Share: