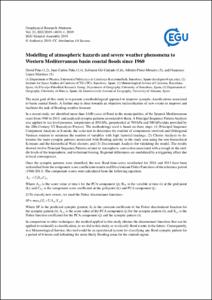 Peña, Juan Carlos
Gil-Guirado, Salvador
Pérez-Morales, Alfredo
López-Martínez, Francisco
Document typeConference report
Rights accessOpen Access
Abstract
The main goal of this study is to present a methodological approach to improve synoptic classifications associatedto basin coastal floods. A further step is done towards an objective reclassification of new events to improve andfacilitate the task of flooding weather forecast.In a recent study, we identified more than 3,600 cases of flood in the municipalities of the Spanish Mediterraneancoast from 1960 to 2013, and analyzed synoptic patterns associated to them. A Principal Sequence Pattern Analysiswas applied to sea level pressure, temperature at 850 hPa, geopotential at 700 hPa and 500 hPa (data provided bythe 20th Century V2 Reanalysis Project). The methodology used is based on three steps: (1) Principal SequenceComponent Analysis in S-mode, the scree-test to determine the number of components involved and OrthogonalVarimax rotation to minimise the number of variables with high factorial loadings; (2) Cluster Analysis to de-termine the main synoptic patterns associated with flooding activity in the study area using the non-hierarchicalK-means and the hierarchical Ward clusters; and (3) Discriminant Analysis for validating the model. The resultsshowed twelve Principal Sequence Patterns related to atmospheric convection associated with a trough in the mid-dle levels of the troposphere, and to thermal forcing. Regional differences are modulated by a triggering effect dueto local convergences.Once the synoptic patterns were identified, the new flood time-series recollected for 2014 and 2015 have beenreclassified from the component score coefficients matrix and Discriminant Fisher Functions of the reference period(1960-2013). The component scores were calculated from the following equation:Aij=SBikCkjWhere Aijis the score value at time i for the PCA component (j); Bikis the variable at time (i) at the grid point(k); and Ckjis the component score coefficient at the grid point (k) and PCA component (j).2) To classify new events, we used the Fisher discriminant functions:SP= maxt{Zt+SAjtXjt}Where SP is the predicted synoptic pattern; Ztis the constant coefficient of the Fisher discriminant function forthe synoptic pattern (t); Ajtis the score value of the PCA component (j) for the synoptic pattern (t); and Xjtis theFisher function coefficient for the PCA component (j) and the synoptic pattern (t).In comparison to other techniques, the method applied in this study obtains the discriminant functions that can be applied to reclassify a classification, as we did in this study, or to classify flood events in the future. Consequently,in a Meteorological Service, this tool could be an operational system for classifying any flood synoptic pattern fora period of 6-hours and delimiting the more likely flooding areas for the studied region.
CitationPino, D. [et al.]. Modelling of atmospheric hazards and severe weather phenomena toWestern Mediterranean basin coastal floods since 1960. A: European Geosciences Union General Assembly. "Geophysical Research Abstracts Vol. 21". 2019.
URIhttp://hdl.handle.net/2117/167853
ISBN1607-7962
Publisher versionhttps://meetingorganizer.copernicus.org/EGU2019/EGU2019-14031-1.pdf
Collections
Share: