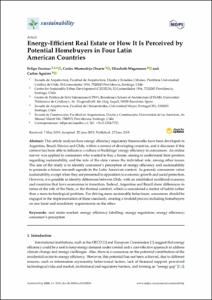 This article analyses how energy efficiency regulatory frameworks have been developed in Argentina, Brazil, Mexico and Chile, within a context of developing countries, and it discusses if this context has been able to influence a culture of buildings’ energy efficiency in consumers. An online survey was applied to consumers who wanted to buy a house, aiming to understand their position regarding sustainability, and the role of the state versus the individual role, among other issues. The aim of the study is to identify consumer’s perception of energy efficiency and sustainability to promote a future research agenda in the Latin American context. In general, consumers value sustainability, except when they are presented in opposition to economic growth and social protection. However, it is possible to identify differences between Chile, with an established neoliberal economy, and countries that have economies in transition. Indeed, Argentina and Brazil show differences in terms of the role of the State, or the thermal comfort, which is considered a matter of habits rather than a mere technological problem. For driving more sustainable behaviours, consumers should be engaged in the implementation of these standards, creating a twofold process including homebuyers on one hand and mandatory requirements on the other.
CitationEncinas, F. [et al.]. Energy-efficient real estate or how it is perceived by potential homebuyers in four Latin American countries. "Sustainability", 27 Juny 2019, vol. 11, núm. 13, p. 3531:1-3531:24.
URIhttp://hdl.handle.net/2117/167850
DOI10.3390/su11133531
ISSN2071-1050
Publisher versionhttps://www.mdpi.com/2071-1050/11/13/3531