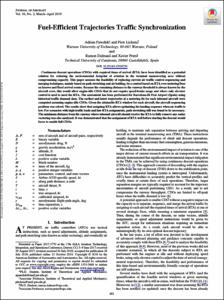 Except where otherwise noted, content on this work is licensed under a Creative Commons license : Attribution-NonCommercial-NoDerivs 3.0 Spain
Abstract
Continuous descent operations (CDOs) with required times of arrival (RTA) have been identified as a potential solution for reducing the environmental footprint of aviation in the terminal maneuvering area without compromising capacity. This paper assesses the feasibility of replacing current air traffic control sequencing and merging techniques, mainly based on path stretching and air holding, by a control based on RTA over metering fixes on known and fixed arrival routes. Because the remaining distance to the runway threshold is always known by the aircraft crew, this would allow engine-idle CDOs that do not require speed-brake usage and where only elevator control is used to meet the RTA. The assessment has been performed for Barcelona-El Prat Airport (Spain) using historical traffic demand data. The earliest and latest trajectories at a metering fix for each inbound aircraft were computed assuming engine-idle CDOs. Given the attainable RTA window for each aircraft, the aircraft sequencing problem was solved. The results show that assigning RTA allows optimizing the landing sequence when air traffic is low. For scenarios with high-traffic loads and late RTA assignments, path stretching still was found to be necessary. The minimum distance from the runway where inbound aircraft should receive the RTA to fully remove any radar vectoring was also analyzed. It was demonstrated that the assignment of RTA well before starting the descent would favor to enable full CDOs.
CitationPawelek, A. [et al.]. Fuel-efficient trajectories traffic synchronization. "Journal of aircraft", Març 2019, vol. 56, núm. 2, p. 481-492.
URIhttp://hdl.handle.net/2117/167825
DOI10.2514/1.C034730
ISSN0021-8669
Publisher versionhttps://arc.aiaa.org/doi/pdf/10.2514/1.C034730
Collections
Share: