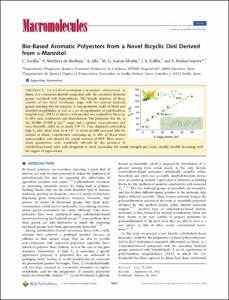 Document typeArticle
PublisherAmerican Chemical Society (ACS)
Rights accessOpen Access
Abstract
2,4:3,5-Di-O-methylene-D-mannitol, abbreviated as Manx, is a D-mannitol-derived compound with the secondary hydroxyl groups acetalized with formaldehyde. The bicyclic structure of Manx consists of two fused 1,3-dioxane rings, with two primary hydroxyl groups standing free for reaction. A homopolyester made of Manx and dimethyl terephthalate as well as a set of copolyesters of poly(butylene terephthalate) (PBT) in which 1,4-butanediol was replaced by Manx up to 50% were synthesized and characterized. The polyesters had Mw in the 30 000−52 000 g mol−1 range and a random microstructure and were thermally stable up to nearly 370 °C. They displayed outstanding high Tg with values from 55 to 137 °C which steadily increased with the content in Manx. Copolyesters containing up to 40% of Manx were semicrystalline and adopted the crystal structure of PBT. Their stress− strain parameters were sensitively affected by the presence of carbohydrate-based units with elongation at break decreasing but tensile strength and elastic moduli steadily increasing with the degree of replacement.
CitationLavilla, C. [et al.]. Bio-based aromatic polyesters from a novel bicyclic diol derived from D-mannitol. "Macromolecules", 23 Octubre 2012, vol. 45, núm. 20, p. 8257-8266.
URIhttp://hdl.handle.net/2117/16780
DOI10.1021/ma3013288
ISSN0024-9297
Publisher versionhttp://pubs.acs.org/doi/pdf/10.1021/ma3013288
Collections
Share: