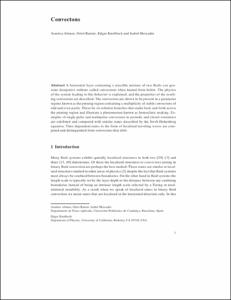 Except where otherwise noted, content on this work is licensed under a Creative Commons license : Attribution-NonCommercial-NoDerivs 3.0 Spain
Abstract
A horizontal layer containing a miscible mixture of two fluids can generate dissipative solitons called convectons when heated from below. The physics of the system leading to this behavior is explained, and the properties of the resulting convectons are described. The convectons are shown to be present in a parameter regime known as the pinning region containing a multiplicity of stable convectons of odd and even parity. These lie on solution branches that snake back and forth across the pinning region and illustrate a phenomenon known as homoclinic snaking. Examples of single pulse and multipulse convectons in periodic and closed containers are exhibited and compared with similar states described by the Swift-Hohenberg equation. Time-dependent states in the form of localized traveling waves are computed and distinguished from convectons that drift.
CitationAlonso, M. [et al.]. Convectons. A: "Localized states in physics: solitons and patterns". Springer, 2011, p. 109-125.
URIhttp://hdl.handle.net/2117/16779
DOI10.1007/978-3-642-16549-8_6
ISBN978-3-642-16548-1
Publisher versionhttp://www.springerlink.com/content/w36l537wk77x4786/
Collections
Share: