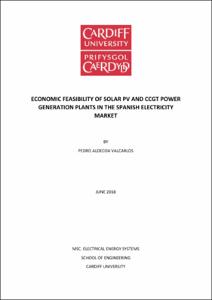 The aim of this project is to describe the expected evolution of the Spanish electricity sector in the coming decades, as well as to study the economic feasibility of solar PV and CCGT power generation plants in this context. First of all, an analysis of the Spanish electricity market has been carried out. The current energy situation has been also studied, both globally and nationally. Given the growing importance of renewable energies in the sector, the legislative development on renewables has been studied, as well as the impact they have generated in the sector and their different financing mechanisms. Based on the environmental objectives established by the European Union, the general lines of the expected energy transition in the Spanish electricity sector have been defined, estimating the installed capacity of the main generation technologies for the period 2020-2050, as well as their contribution in the generation mix. Likewise, an analysis of the price of electricity in the daily market has been carried out, from which a price prediction model has been developed. According to the results, the weight of renewables will increase progressively during the next decades, reaching in 2050 an approximate share of 90% in the generation mix. The expected load factor for CCGTs, on the other hand, will increase in the mid-term, whereas in the long-term will be reduced below the current values. The price of electricity, on the other hand, will increase significantly between 2020 and 2030, whereas as of this year will undergo a gradual but steady reduction. Given the expected relevance of solar PV and CCGT technologies in the future Spanish generation park, the economic feasibility of both technologies has been studied. In the case of the solar PV plant, an analytical model has been developed in MATLAB by which forecasts of the generation of the plant have been made. These results have been validated by the software SOLAR PV, making a comparison between both results. For the analysis of CCGT plant, the price in the adjustment markets has been studied, analysing its relationship with the price in the daily market. According to the results, both projects would be profitable. However, given the uncertainty inherent to forecasts of the price, alternative forecasts have been considered. Due to substantial differences in the mid-term, the main financial parameters of solar PV and CCGT power generation plants have been calculated again, considering in this case the alternative forecasts of the price. From this second analysis it has been concluded that, whereas the solar PV would not require any additional financing mechanism in order to be profitable, capacity payments would be indispensable in the case of the CCGT plant. It has been also concluded that, in the analysis of the economic feasibility of marginal technologies, such as CCGTs, the average price of the electricity in the markets is not a representative parameter.
SubjectsPhotovoltaic power generation, Photovoltaic power systems, Energia solar fotovoltaica, Instal·lacions fotovoltaiques