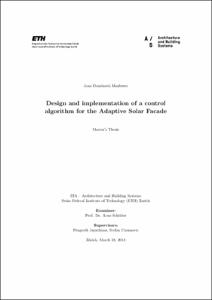 The Adaptive Solar Facade (ASF) comprises the beneﬁts of both dynamic shading and Building Integrated Photovoltaics to assess the building energy demand and improve the inhabitant experience. Unfortunately, the adaptive control system to be implemented in the real prototypes is yet to be developed. Moreover, the current computation times are still excessively high for their proper integration in a physical facade. This thesis presents a control algorithm that has been successfully implemented in a prototype using an Arduino board and a Raspberry Pi. The complex behavior of the facade is resembled using Python scripts, which strategically divide the algorithm in subprocesses. By organizing appropriately the execution of the scripts, the current computational period is reduced 200 times. The present control algorithm supports any arbitrary conﬁguration of the facade, and is capable to process whether a direct command of a module, or the computation of the ASF optimal position with respect to the user requirements. The implementation of the control system takes advantage of the integrated Digital Motion Processors of the Inertial Measurement Units, which relieve the system from processing raw data. The performance of the algorithm is compared with the former simulation framework. The results show a precise interpretation of the hourly changes of the weather excepting some eventual large errors related with the diffuse irradiation. The sensitivity analyses of the sensors demonstrate their suitability for the control process, showing deviations of 0.05◦ in rest position and maximum drifts of 1.4◦ when abrupt movements are performed. In a worst case scenario, the complete movement of one panel would take 20 seconds. For steady-state purposes, this timing is acceptable, but for features with high interaction with the inhabitant, a parallel control of the panels must be introduced.
SubjectsSolar buildings, Photovoltaic power generation -- Mathematical models, Edificis solars, Energia solar fotovoltaica -- Models matemàtics
URIhttp://hdl.handle.net/2117/167688