Development of a test bench for the electronics of ionizing radiationdetectors 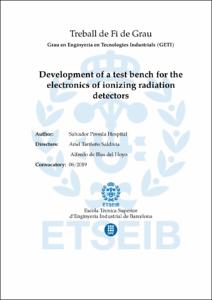 Document typeBachelor thesis
Rights accessOpen Access
Abstract
In the present final degree project a low cost test bench is presented. A test bench is an envi-ronment used to verify the correctness of devices. In this case, the test bench is used to test preamplifiers and digitizers of the nuclear instrumentation laboratory. These instruments are used for ionizing particle detection. The initial problematic of the project was to investigate if it was possible to do a testing working bench with a cheap digital circuit as microcontrollers. After a study of the actual market, the Arduino Due was chosen. Arduino is an open-source electronics platform based on easy-to-use hardware and software. In the initial stage of the project, the attention was focused on the documentation about the Arduino boards. It was quickly observed that the sampling time delivered by the Aduino IDE was not acceptable for a nuclear test bech. When inquiring into the technical datasheet of the Atmel SAM3X microchip, used by the Arduino Due, it was achieved making signals with sampling time acceptable for nuclear instrumentation. Once discovered the potential of Arduino Due, a GUI was made to fully customize the shape of the pulses generated by the Arduino board. Therefore, the development of a cheap testing workbench was achieved.
SubjectsTesting-machines, Ionizing radiation, Màquines d'assaig, Radiació ionitzant
URIhttp://hdl.handle.net/2117/167497
Collections
Share: