Path planning for autonomous buses based on optimal control 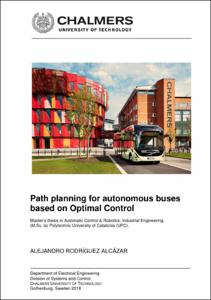 This thesis presents an algorithm to generate trajectories for an autonomous bus approaching a bus stop. The path planning algorithm is formulated as an Optimal Control Problem (OCP) which is solved by means of nonlinear programming (NLP) using the direct multiple shooting method. This method has shown to be a good choice for solving nonlinear Boundary Value Problems (BVP) like this one -where there are constraints such as the limits of the road, the model dynamics or passengers comfort- due to its highly accurate solution and faster convergence and stability than other methods like direct single shooting methods. It uses a kinematic bicycle model with a coordinate transformation which uses the vehicle position along the path as independent variable instead of using time which permits the definition of the constraints independently of the vehicle’s speed. The OCP is solved in MATLAB using CasADi, a symbolic tool for solving nonlinear optimization problems that provides high level interfaces to make the problem writing easier, in addition of having better performance than similar tools. The proposed algorithm is evaluated in multiple scenarios like different kinds of bus stops and paths inside confined areas, giving as a result a trajectory that meets with the imposed constraints successfully. Experimental tests on a real autonomous bus are carried out, resulting in a smooth bus stop manoeuvre that the passengers evaluated as fully acceptable.
SubjectsAutonomous vehicles, Bus terminals, Vehicles autònoms, Autobusos -- Estacions
URIhttp://hdl.handle.net/2117/167488