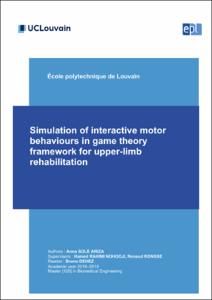 Except where otherwise noted, content on this work is licensed under a Creative Commons license : Attribution-NonCommercial-NoDerivs 3.0 Spain
Abstract
An increasing number of individuals are affected by neurological diseases worldwide. Nowadays, stroke is the leading cause of adult disability in western countries, with upper limb hemiparesis being one of the most common consequences. Therefore, there is a growing interest in developing robotic interfaces to provide neurologically affected individuals the right amount of assistance to guarantee a great recovery. The interactive control of such rehabilitation robots with a stroke survivor is critical to motor recovery, and a successful rehabilitation requires the patient to be engaged in motor task execution. This thesis focuses on the new development of an interactive robot controller, and aims to ensure that differential game theory can be used as a framework to describe various interactive behaviours between a robot and a human user. In this thesis, it will be simulated the interaction between a robot and an injured human user who is recovering after stroke in the game theory framework, demonstrating that it can induce a stable interaction between the two partners by identifying each other’s control law and allow them to successfully perform the task with minimum effort. In this thesis is expected to find a detailed description of the different interactive motor behaviours that exist between a rehabilitation robot and a human user: collaboration, cooperation, competition and co-activity. It will also contain the simulation of these behaviours. In the description of the human-robot interactive motor behaviours, it will be seen that some of these behaviours are modelled in the simulation in the game theory framework, such as collaboration, cooperation and competition, while co-activity consists on a problem where the robot and the human are modelled as two independent linear quadratic regulators. Finally, it will be provided a comparison between the use of a game theory controller and the use of a linear quadratic regulator controller for the development of a rehabilitation robot and it will be demonstrated why a game theory controller is a better option for robots that work in physical contact with humans.
SubjectsCerebrovascular disease -- Patients -- Rehabilitation, Robotics in medicine, Human-robot interaction, Malalties cerebrovasculars -- Pacients -- Rehabilitació, Robòtica en medicina, Interacció persona-robot
DegreeMÀSTER UNIVERSITARI EN ENGINYERIA INDUSTRIAL (Pla 2014)
Location
1: Rue Archimède 1, 1348 Ottignies-Louvain-la-Neuve, Bèlgica
URIhttp://hdl.handle.net/2117/167482
Collections
Share: