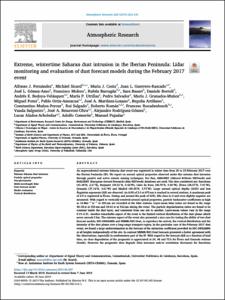 An unprecedented extreme Saharan dust event was registered in winter time from 20 to 23 February 2017 over the Iberian Peninsula (IP). We report on aerosol optical properties observed under this extreme dust intrusion through passive and active remote sensing techniques. For that, AERONET (AErosol RObotic NETwork) and EARLINET (European Aerosol Research LIdar NETwork) databases are used. The sites considered are: Barcelona (41.38°N, 2.17°E), Burjassot (39.51°N, 0.42°W), Cabo da Roca (38.78°N, 9.50°W), Évora (38.57°N, 7.91°W), Granada (37.16°N, 3.61°W) and Madrid (40.45°N, 3.72°W). Large aerosol optical depths (AOD) and low Ångström exponents (AE) are observed. An AOD of 2.0 at 675¿nm is reached in several stations. A maximum peak of 2.5 is registered in Évora. During and around the peak of AOD, AEs close to 0 and even slightly negative are measured. With regard to vertically-resolved aerosol optical properties, particle backscatter coefficients as high as 15¿Mm-1¿sr-1 at 355¿nm are recorded at the lidar stations. Layer-mean lidar ratios are found in the range 40–55¿sr at 355¿nm and 34–61¿sr at 532¿nm during the event. The particle depolarization ratios are found to be constant inside the dust layer, and consistent from one site to another. Layer-mean values vary in the range 0.19–0.31. Another remarkable aspect of the event is the limited vertical distribution of the dust plume which never exceeds 5¿km. The extreme aspect of the event also presented a nice case for testing the ability of two dust forecast models, BSC-DREAM8b and NMMB/BSC-Dust, to reproduce the arrival, the vertical distribution and the intensity of the dust plume over a long-range transport region. In the particular case of the February 2017 dust event, we found a large underestimation in the forecast of the extinction coefficient provided by BSC-DREAM8b at all heights independently of the site. In contrast NMMB/BSC-Dust forecasts presented a better agreement with the observations, especially in southwestern part of the IP. With regard to the forecast skill as a function of lead time, no clear degradation of the prognostic is appreciated at 24, 48 and 72¿h for Évora and Granada stations (South). However the prognostic does degrade (bias increases and/or correlation decreases) for Barcelona (North), which is attributed to the fact that Barcelona is at a greater distance from the source region and to the singularity of the event.
CitationFernández, A. J. [et al.]. Extreme, wintertime Saharan dust outbreak in the Iberian Peninsula: lidar monitoring and evaluation of dust forecast models during the February 2017 event. "Atmospheric research", 18 Juny 2019, vol. 228, p. 223-241.
URIhttp://hdl.handle.net/2117/167399
DOI10.1016/j.atmosres.2019.06.007
ISSN0169-8095
Publisher versionhttps://www.sciencedirect.com/science/article/pii/S016980951930287X