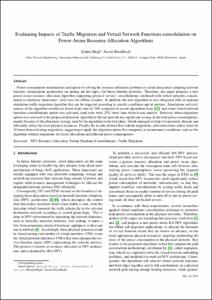 Document typeArticle
PublisherElsevier
Rights accessOpen Access
Abstract
Power consumption minimization and speed of solving the resource allocation problem on cloud datacenters adopting network function virtualization architecture are among the hot topics for future Internet networks. Therefore, this paper proposes a new power aware resource allocation algorithm supporting physical servers’ consolidations combined with virtual networks consolidation to minimize datacenters’ total costs for offline scenario. In addition, the new algorithm is also integrated with an optional standalone traffic migration algorithm that can be triggered according to specific conditions and at anytime. Simulations and evaluations of the algorithm resulted on lower total costs by 30% compared to recent algorithms from Eramo et al. (2017), and when virtual network functions consolidations option was activated, total costs were 25% lower than when it was inactive. However, when migrations option was activated in the proposed allocation algorithm it did not provide any significant savings in the total power consumptions, mainly because of the allocation strategy used by the algorithm in the first place, which managed to help it to precisely allocate and efficiently utilize the least physical resources. Finally, the results showed that without migrations, allocation times where faster by 10 times than activating migrations, suggesting to apply the migration option for emergency or maintenance conditions, and use the algorithm without migrations for faster allocations and efficient power consumptions.
Description
© <2019>. This manuscript version is made available under the CC-BY-NC-ND 4.0 license http://creativecommons.org/licenses/by-nc-nd/4.0/
CitationHejja, K.A.M.; Hesselbach, X. Evaluating impacts of traffic migration and virtual network functions consolidation on power aware resource allocation algorithms. "Future generation computer systems", 1 Desembre 2019, vol. 101, p. 83-98.
URIhttp://hdl.handle.net/2117/167394
DOI10.1016/j.future.2019.06.015
ISSN0167-739X
Publisher versionhttps://www.sciencedirect.com/science/article/pii/S0167739X19304108
Collections
Share: