A proteomic analysis of the statocyst endolymph in common cuttlefish (Sepia officinalis): an assessment of acoustic trauma after exposure to sound 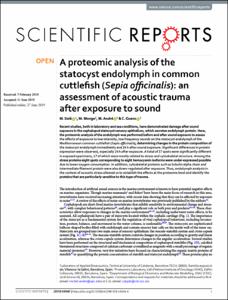 Quero López, Carme
Document typeArticle
PublisherNature
Rights accessOpen Access
Abstract
Here, the proteomic analysis of the endolymph was performed before and after sound exposure to assess the efects of exposure to low intensity, low frequency sounds on the statocyst endolymph of the Mediterranean common cuttlefsh (Sepia ofcinalis), determining changes in the protein composition of the statocyst endolymph immediately and 24h after sound exposure. Signifcant diferences in protein expression were observed, especially 24h after exposure. A total of 37 spots were signifcantly diferent in exposed specimens, 17 of which were mostly related to stress and cytoskeletal structure. Among the stress proteins eight spots corresponding to eight hemocyanin isoforms were under-expressed possible due to lower oxygen consumption. In addition, cytoskeletal proteins such as tubulin alpha chain and intermediate flament protein were also down-regulated after exposure. Thus, endolymph analysis in the context of acoustic stress allowed us to establish the efects at the proteome level and identify the proteins that are particularly sensitive to this type of trauma.
CitationSole, M. [et al.]. A proteomic analysis of the statocyst endolymph in common cuttlefish (Sepia officinalis): an assessment of acoustic trauma after exposure to sound. "Scientific reports", 1 Desembre 2019, vol. 9:9340, p. 1-12.
URIhttp://hdl.handle.net/2117/167354
DOI10.1038/s41598-019-45646-6
ISSN2045-2322
Publisher versionhttps://www.nature.com/articles/s41598-019-45646-6
Collections
Share: