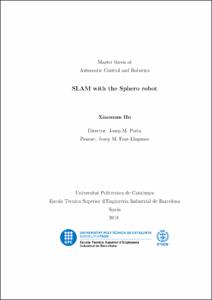 The Simultaneous Localization and Mapping (SLAM) problem for mobile robots aims at build-ing a map of an unknown environment while simultaneously determining the robot’s position within this map. In the robotics community, SLAM is considered a solved problem in the most common settings, but an approach to the SLAM problem using minimal sensing information is still relevant both from the theoretical and practical point of view. In this context, this M.Sc. thesis aims at studying and implementing a special type of SLAM solely based on the information provided by the on-board Inertial Measurement Unit (IMU) from a spherical mobile robot called Sphero, developed by Orbotix. This IMU permits detecting impacts with the environment and performing odometry subject to significant errors. Thus, the SLAM problem will be restricted to environments defined by closed regions bounded by orthogonal walls meeting at convex and concave corners. In this kind of environments, the robot can follow a motion in contact with the walls, while detecting corners, till it considers that it has returned to the initial point. As a result, a map of the environment is completed. We will show how it is possible to define the location of the corners or landmarks of the rectilinear environments from changes in the robot’s speed. A map representation, that consist of the location of the landmarks, their uncertainty, and their connection through straight walls, is defined. Three uncertainty models have been used and compared: a probabilistic model and two bounded-error models. Two basic operations have been implemented for the three uncertainty models: propagation and fusion. Propagation is the basic operation that permits assigning an uncertainty to the location of a landmark, given the location and uncertainty of the previously visited landmark and the estimated error committed in the odometry. If this new landmark has already been visited, it has a previous assigned uncertainty. This uncertainty has then to be updated given the new uncertainty using a fusion operation. This concept of fusion and propagation of uncertainty applies to the three mentioned methods, they only differ in their implementation. The probabilistic approach has dominated much of the work on low-level sensing processes handling uncertainty. Although probabilistic models which assume a uniform distribution inside a range have been used, the computational tractability of low-level sensing processes, under this approach, requires the general assumption that the experimental error is simply an additive term with Gaussian distribution, and the fusion operation is essentially that of maximum likelihood estimation. Nevertheless, it is difficult to give complete error analysis because the complexity of the process of extracting low level data. Instead, when using bounded-error models, every measurement is assumed to lead to an uncertainty set in the space of parameters where the actual value is bound to be, and the fusion operation essentially reduces to find a bound for the intersection of two sets. We will show how the two bounded-error models are of interest in those situations in which no probabilistic description of errors is available, only bound on them are known. Thus, these models are of particular interest in minimalist robotics. Actually, one important goal of this thesis has been to show how, using simple sensor information, it is possible to solve complex tasks, such as computing a map of the boundaries of an office-like environment. Thus, we have tried to answer the basic question raised by minimalist robotics: How simple can a robot be while nevertheless accomplishing interesting tasks? There are at least three important reasons to focus on minimalist robots: (1) it encourages us to find what is the least amount of information needed to solve a certain task, giving insights into the task’s inherent complexity;(2) it also encourages us to use inexpensive sensors providing very limited or noisy sensing; and, finally, (3) it may allow us to manufacture inexpensive robots with low energy consumption. This thesis is structured as follows. Chapters 2 and 3 describe the basic theory behind the mapping solutions relying, respectively, on the Kalman filter an on the set theoretic approaches. Then, Chapter 4 describes the hardware and software of the Sphero robot, including the robot’s control, motion and calibration. Chapter 5 presented the implementation and the experimental results. Finally, Chapter 6 includes the conclusions and indicate possible extensions of this work.
SubjectsRobotics, SLAM (Computer program language), Robòtica, SLAM (Llenguatge de programació)
URIhttp://hdl.handle.net/2117/167345