Urbanism study: pratical example of expropriation in the area of Sagrada Familia 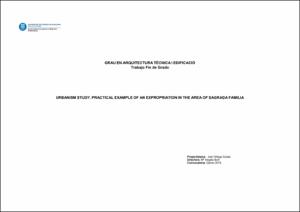 This project tries to explain what expropriation is, the laws that regulates it, from the State laws to autonomic laws, making an explanation of that laws with the different urbanistic tools implicated on the matter. The first part consists in an explanation of all that laws, regulations and tools and the second part a practical example in the city of Barcelona, specifically in the area of Sagrada Familia, affected by the Plan General Metropolitano. The idea of the practical example is to have a view of the process that city makes in reality to make it so. I have found some troubles to achieve that, all the data is from public statements, like Catastro, but the data cannot be adjusted to reality, to make a good valuation, we should address to Registro de la Propiedad or access the buildings affected, that´s a thing I couldn´t do, problems with neighbors or the impossibility to ask in the Registro de la Propiedad for data free of charge. Although all of this, the procedure is there, and you can follow it to make an idea of it and see that the price offered can be very good and inside the market parameters. The main idea of this project through showing the process and the prices offered to the owners is to finish with the idea that normally people have of this administrative procedure and by the other way, how expensive can be for a Council to expand its public field or to make new areas for the neighborhoods. Specially one like this, in Sagrada Familia, where exists a great conflict with the idea of expropriation between the neighbors and the administration. We must think that this field is classified as public since 1976 when the first PGM was approved and stills undone. The legislative part it´s done as a reference to know which laws affect us and we must know them, but it´s a lawyers job to verifies them, we as technicians would be able to work as appraiser, very common in private life and seen in new real estate to valuate them when we ask for a mortgage, but there´s a possible way of work in public administration as appraiser too, maybe a little bit unknown.
SubjectsEminent domain, Expropiació, Expropiació -- Catalunya -- Barcelona