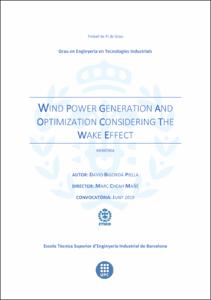 This project, firstly, postulates the hypothesis that operating the different wind turbines of a wind power plant at a concrete performance and different from the optimal one, has as a result an increase on the wind speeds in the wakes and therefore, on the wind speed that reaches the downwind turbines shadowed by the forward ones, and consequently, a significant increase on the total electric generation of the farm. Previously, the aerodynamic theory that will be necessary to develop the project is reviewed, as well as the models that define the wind speeds depending on the wake effect. “Le Parc Éolien en mer de Fécamp” is also described as the real application case of study. The hypothesis of the optimization methodology is verified through two more simple cases and, finally, the real application case of study is considered with all his wind turbines at the optimal point, in order to calculate the total energy produced by the wind power plant including the wake effect and thus, demonstrating the global loss of energy production by means of this conventional operation strategy.
SubjectsWind power, Energia eòlica