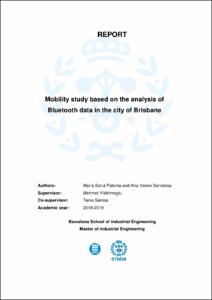 Document typeMaster thesis
Rights accessOpen Access
Abstract
In the field of transport planning, many studies have examined the effectiveness of different algorithms related to the problem of transport network design. However, no study has considered the alternative of a problem of transport network modification, which consists of making small alterations to the current network without having to entirely design it. The focus of this research is on designing an algorithm able to find the optimal route for placing a new public transport line, understanding optimal as capable of minimizing the traffic of private vehicles around the city. As observed, it corresponds to one case of transport network modification. Data used in this project were collected by the detection of devices through the Bluetooth sensors spread over the city of Brisbane, Australia. The use of real data led to the need of a previous analysis and cleaning of the database, in order to obtain results which are feasible and reliable. Since it is a non-linear optimization problem, heuristic solution algorithms are used in the design procedure. The algorithm proposed is based on genetic algorithms, and it has been adjusted to this case of study by adapting the functions that compound the algorithm. The proposed model was tested and the results obtained analysed, concluding that the designed algorithm is effective for generating routes able to minimize the car flow in a transport network.
SubjectsUrban transportation, Mobilitat sostenible
Location
1: 190A Vulture St, South Brisbane QLD 4101, Austràlia
URIhttp://hdl.handle.net/2117/167117
Collections
Share: