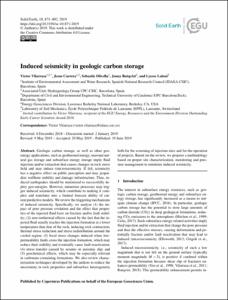 Rutqvist, Jonny
Laloui, Lyesse
Document typeArticle
Rights accessOpen Access
European Commission's projectGEoREST - predictinG EaRthquakES induced by fluid injecTion (EC-H2020-801809)
Abstract
Geologic carbon storage, as well as other geo-energy applications, such as geothermal energy, seasonal natural gas storage and subsurface energy storage imply fluid injection and/or extraction that causes changes in rock stress field and may induce (micro)seismicity. If felt, seismicity has a negative effect on public perception and may jeopardize wellbore stability and damage infrastructure. Thus, induced earthquakes should be minimized to successfully deploy geo-energies. However, numerous processes may trigger induced seismicity, which contribute to making it complex and translates into a limited forecast ability of current predictive models. We review the triggering mechanisms of induced seismicity. Specifically, we analyze (1) the impact of pore pressure evolution and the effect that properties of the injected fluid have on fracture and/or fault stability; (2) non-isothermal effects caused by the fact that the injected fluid usually reaches the injection formation at a lower temperature than that of the rock, inducing rock contraction, thermal stress reduction and stress redistribution around the cooled region; (3) local stress changes induced when low-permeability faults cross the injection formation, which may reduce their stability and eventually cause fault reactivation; (4) stress transfer caused by seismic or aseismic slip; and (5) geochemical effects, which may be especially relevant in carbonate-containing formations. We also review characterization techniques developed by the authors to reduce the uncertainty in rock properties and subsurface heterogeneity both for the screening of injection sites and for the operation of projects. Based on the review, we propose a methodology based on proper site characterization, monitoring and pressure management to minimize induced seismicity.
CitationVilarrasa, V. [et al.]. Induced seismicity in geologic carbon storage. "Solid Earth", Juny 2019, vol. 10, núm. 3, p. 871-892.
URIhttp://hdl.handle.net/2117/167061
DOI10.5194/se-10-871-2019
ISSN1869-9510
Publisher versionhttps://www.solid-earth.net/10/871/2019/se-10-871-2019.html
Other identifiershttp://hdl.handle.net/10261/184565
Collections
Share: