Seismic site classification from the horizontal-to-vertical response spectral ratios: use of the Spanish strong-motion database 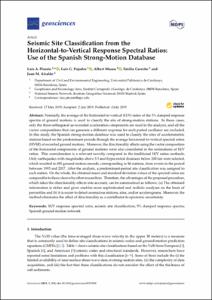 Except where otherwise noted, content on this work is licensed under a Creative Commons license : Attribution 3.0 Spain
ProjectDESARROLLO Y APLICACION DE HERRAMIENTAS AVANZADAS PARA LA EVALUACION, PREVENCION Y GESTION DEL RIESGO SISMICO (MINECO-CGL2015-65913-P)
Abstract
Normally, the average of the horizontal-to-vertical (H/V) ratios of the 5% damped response spectra of ground motions is used to classify the site of strong-motion stations. In these cases, only the three-orthogonal as-recorded acceleration components are used in the analysis, and all the vector compositions that can generate a different response for each period oscillator are excluded. In this study, the Spanish strong-motion database was used to classify the sites of accelerometric stations based on the predominant periods through the average horizontal-to-vertical spectral ratios (HVSR) of recorded ground motions. Moreover, the directionality effects using the vector composition of the horizontal components of ground motions were also considered in the estimations of H/V ratios. This consideration is a relevant novelty compared to the traditional H/V ratios methods. Only earthquakes with magnitudes above 3.5 and hypocentral distances below 200 km were selected, which resulted in 692 ground-motion records, corresponding to 86 stations, from events in the period between 1993 and 2017. After the analysis, a predominant-period site classification was assigned to each station. On the whole, the obtained mean and standard deviation values of the spectral ratios are comparable to those shown by other researchers. Therefore, the advantages of the proposed procedure, which takes the directionality effects into account, can be summarized as follows: (a) The obtained information is richer and gives enables more sophisticated and realistic analyses on the basis of percentiles and (b) it is easier to detect anomalous stations, sites, and/or accelerograms. Moreover, the method eliminates the effect of directionality as a contributor to epistemic uncertainty.
CitationPinzón, L. [et al.]. Seismic site classification from the horizontal-to-vertical response spectral ratios: use of the Spanish strong-motion database. "Geosciences (Switzerland)", Juliol 2019, vol. 9, núm. 7, p. 294-1-294-13.
URIhttp://hdl.handle.net/2117/167058
DOI10.3390/geosciences9070294
ISSN2076-3263
Publisher versionhttps://www.mdpi.com/2076-3263/9/7/294
Collections
Share: