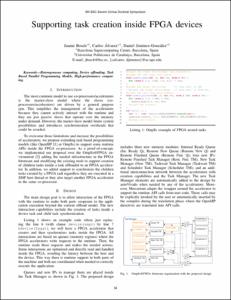 Except where otherwise noted, content on this work is licensed under a Creative Commons license : Attribution-NonCommercial-NoDerivs 3.0 Spain
Abstract
The most common model to use co-processors/accelerators is the master-slave model where the slaves (coprocessors/ accelerators) are driven by a general purpose cpu. This simplifies the management of the accelerators because they cannot actively interact with the runtime and they are just passive slaves that operate over the memory under demand. However, the master-slave model limits system possibilities and introduces synchronization overheads that could be avoided. To overcome those limitations and increase the possibilities of accelerators, we propose extending task based programming models (like OpenMP [1] or OmpSs) to support some runtime APIs inside the FPGA co-processor. As a proof-of-concept, we implemented our proposal over the OmpSs@FPGA environment [2] adding the needed infrastructure in the FPGA bitstream and modifying the existing tools to support creation of children tasks inside a task offloaded to an FPGA accelerator. In addition, we added support to synchronize the children tasks created by a FPGA task regardless they are executed in a SMP host thread or they also target another FPGA accelerator in the same co-processor.
CitationBosch Pons, J.; Álvarez Martínez, C.; Jiménez González, D. Supporting task creation inside FPGA devices. A: BSC Severo Ochoa International Doctoral Symposium (6th: 2019: Barcelona). "Book of abstracts". Barcelona: Barcelona Supercomputing Center, 2019, p. 34-35.
URIhttp://hdl.handle.net/2117/166955
Collections
Share: