Mobile manipulation with the TiaGo robot: navigation and planning. 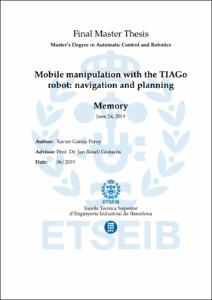 Document typeMaster thesis
Rights accessOpen Access
Abstract
This project aims to design and implement a solution for a complex mobile manipulation task using PAL Robotics’ robot TIAGo. The goal is to use the platform as an assistive robot, making it capable of picking a desired object from a certain location and moving it to another. More precisely the task in which the project will focus will be to pick a certain soda can from a table with several of them on it and pour its contents into a glass placed on another table for the user to have his/her drink. For that, all the perception, interaction, planning and mobile capabilities of the robotic platform will be exploited in order to develop a suitable and complete solution. The solution generated is modular so it can be launched as a whole process to complete the entire challenge but also as independent modules to solve different tasks. This makes it possible to easily integrate them to other processes in order to complete other similar tasks, making the packages more versatile and adaptable. The work has been divided between two master thesis projects. The first one focuses on developing the packages in charge of navigation and arm manipulation, which is reflected on this memory. The second one, carried out by Miller Stiven Espinosa Muñoz, covers the perception and task management blocks. For the navigation part a solution has been implemented to map the environment and define all the necessary poses to complete the manipulation process. The method developed links the information of the map with visual marks placed on the tables of the scenario. In this way the poses are defined with respect to these marks and linked to the map automatically. For navigation itself the ROS 2D Navigation stack has been exploited to control the base and move it successfully. For the arm manipulation two different techniques, aside of the ones already built in the robot, have been implemented. A technique based on generating trajectories using the geometric planner RRTConnect has been developed for the movements involved in picking the cans from the table using the interface of The Kautham Project, a software for robot motion planning. Another imitation method has been developed using the learning framework of Dynamic Movement Primitives to perform the movements involved in serving the soda drink. Both methods have been implemented into a single package with functions capable of performing the trajectories by interfacing the services already built in the robot. All the solutions developed have been proven to work properly to achieve the goal established. The robot has been capable of mapping and navigating the room successfully while correctly defining all the required poses around the tables to complete the task demanded. The arm manipulation capabilities have been exploited to perform all the necessary movements to pick and serve the soda cans. The solution presents some flaws in terms of reliability and robustness mainly due to errors in sensing the position of the cans and in localizing the robot in the map. Future work is suggested in order to solve these problems and improve the performace of the system.
SubjectsComputer vision, Robotics, Visió per ordinador, Robòtica
URIhttp://hdl.handle.net/2117/166894
Collections
Share: