Long wave generation induced by differences in the wave-group structure 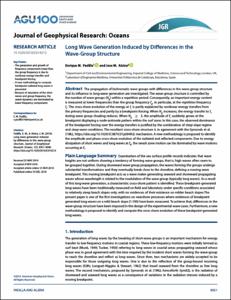 Document typeArticle
PublisherWiley
Rights accessOpen Access
Abstract
The propagation of bichromatic wave groups with differences in the wave-group structure and its influence in long-wave generation are investigated. The wave-group structure is controlled by the number of wave groups (Ng) within a repetition period. Consequently, an important energy content is measured at lower frequencies than the group frequency fg, in particular, at the repetition frequency fr. The cross-shore evolution of the energy at fr is partly explained by nonlinear energy transfers from the primary frequencies and partly by a breakpoint forcing. When Ng increases, the energy transfer to fr during wave group shoaling reduces. When Ng=3, the amplitude of fr suddenly grows at the breakpoint displaying a node-antinode pattern within the surf zone. In this case, the observed dominance of the breakpoint forcing over the energy transfers is justified by the combination of steep-slope regime and steep-wave conditions. The resultant cross-shore structure is in agreement with the Symonds et al. (1982, https://doi.org/10.1029/JC087iC01p00492) mechanism. A new methodology is proposed to identify the amplitude and phase cross-shore evolution of the radiated and reflected components. Due to energy dissipation of short waves and long waves at fg, the swash zone motion can be dominated by wave motions occurring at fr.
CitationPadilla, E.; Alsina, J. Long wave generation induced by differences in the wave-group structure. "Journal of geophysical research: oceans", Desembre 2018, vol. 123, núm. 12, p. 8921-8940.
URIhttp://hdl.handle.net/2117/166881
DOI10.1029/2018JC014213
ISSN2169-9291
Publisher versionhttps://agupubs.onlinelibrary.wiley.com/doi/abs/10.1029/2018JC014213
Other identifiershttps://www.researchgate.net/publication/328993384_Long_Wave_Generation_Induced_by_Differences_in_the_Wave-Group_Structure
Collections
Share: