Knotting fractional-order knots with the polarization state of light 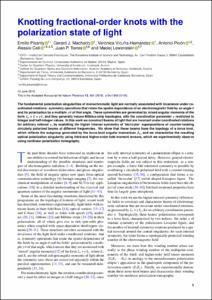 Lewenstein, Maciej
Document typeArticle
PublisherNature
Rights accessOpen Access
Abstract
The fundamental polarization singularities of monochromatic light are normally associated with invariance under coordinated rotations: symmetry operations that rotate the spatial dependence of an electromagnetic field by an angle and its polarization by a multiple of that angle. These symmetries are generated by mixed angular momenta of the form J_γ = L + γ S, and they generally induce Möbius-strip topologies, with the coordination parameter restricted to integer and half-integer values. In this work we construct beams of light that are invariant under coordinated rotations for arbitrary rational γ, by exploiting the higher internal symmetry of ‘bicircular’ superpositions of counter-rotating circularly polarized beams at different frequencies. We show that these beams have the topology of a torus knot, which reflects the subgroup generated by the torus-knot angular momentum J_γ, and we characterize the resulting optical polarization singularity using third-and higher-order field moment tensors, which we experimentally observe using nonlinear polarization tomography.
CitationPisanty, E. [et al.]. Knotting fractional-order knots with the polarization state of light. "Nature Photonics", 10 Juny 2019, vol. 13, p. 569-574.
URIhttp://hdl.handle.net/2117/166861
DOI10.1038/s41566-019-0450-2
Publisher versionhttps://www.nature.com/articles/s41566-019-0450-2
Collections
Share: