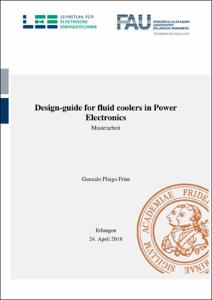 Show full item record
Pliego Prim, Gonzalo
Tutor / directorMärz, Martin
CovenanteeFriedrich-Alexander-Universität Erlangen-Nürnberg
Document typeMaster thesis
Rights accessOpen Access
Abstract
This paper is orientated for the ones who are interested in solving the heat dissipation issue that occurs in the field of Power Electronics. In high voltage direct current (HVDC) transmissions the use of water as a heat transfer fluid can be inappropriate because of the strong levels of electric tension to which it is subjected. Therefore, in order to continue dissipating heat by means of a fluid (convection), other type of coolants should be used, specifically those which remain inert when subjected to high voltages. That is, dielectric fluids specially designed with good thermal properties for this particular function. The main objectives of this document are the validation of an analytical model that can accurately predict the behaviour of the considered fluid coolants in terms of heat dissipation and pressure drop and to give the reader an overall view on how can different fluid coolants work from a thermal point of view, involving also a comparison with liquid water. The standard cooling system considered consists of a heat source that represents an average Power Electronics chip, an aluminium plate-fin heat sink and the coolant flow that removes the heat from the fins as it travels through the heat sink. The validation of the analytical model was done by comparing it to a numerical one, specifically with simulations made with ANSYS Fluent, the CFD engineering software used world-wide for industry applications. In the first step, liquid water was successfully validated. Therefore, the analysis advanced to the second phase which brought some interesting results for the three dielectric fluid coolants analysed (3M Novec 7500, Galden HT-135 and Fluorinert FC-3283) but not so satisfactorily results for water-glycol (the other fluid studied). From that point, two parallel paths were opened: one for researching why the analytical model did not work for water-glycol as good as for the three dielectric coolants and the other one consisted in the behaviour comparison of the dielectric fluids, whose model was stated as correct. The research on water-glycol originated the conclusion that with low Reynolds number values the analytical model had problems to predict accurately the behaviour of the cooling system. On the other hand, the analytical method was considered valid for the dielectric fluid coolants, which allowed to get a deeper view to their operation curves. The thermal efficiency curves for these three fluid coolants were plotted in diagrams as well as the curves for the volumetric flow and the pressure drop. Selecting different values for the geometric variables and for the hydraulic power permitted the obtaining of different configurations that were analysed in the diagrams. Finally, the dielectric fluid coolants were compared between them to analyse which one of them could be more useful for a heat transfer application. They were also compared to liquid water, which obviously gave better heat transfer outputs than the dielectric ones. The thesis ends opening new paths of study after the one here defined.
SubjectsRefrigerants, Dielectric devices, Dispositius dielèctrics, Refrigerants
DegreeMÀSTER UNIVERSITARI EN ENGINYERIA INDUSTRIAL (Pla 2014)
URIhttp://hdl.handle.net/2117/166848
Collections
Share: