Physical-mechanical comparison of the traditional gypsums from Albarracín and Pallars 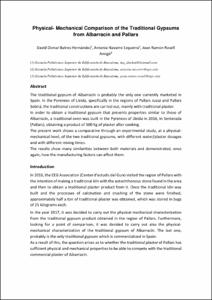 Physical- Mechanical Comparison of the Traditional Gypsums from Albarracín and Pallars.pdf (611,0Kb)
Share:

Document typeConference lecture
PublisherInternational Union of Laboratories and Experts in Construction Materials, Systems and Structures (RILEM)
Rights accessOpen Access
Abstract
The traditional gypsum of Albarracín is probably the only one currently marketed in Spain. In the Pyrenees of Lleida, specifically in the regions of Pallars Jussá and Pallars Sobirá, the traditional constructions are carried out, mainly with traditional plaster. In order to obtain a traditional gypsum that presents properties similar to those of Albarracín, a traditional oven was built in the Pyrenees of Lleida in 2016, in Senterada (Pallars), obtaining a product of 500 Kg of plaster after cooking. The present work shows a comparative through an experimental study, at a physical-mechanical level, of the two traditional gypsums, with different water/plaster dosages and with different mixing times. The results show many similarities between both materials and demonstrated, once again, how the manufacturing factors can affect them.
CitationBatres, D.; Navarro Ezquerra, A.; Rosell, J. Physical-mechanical comparison of the traditional gypsums from Albarracín and Pallars. A: Historic Mortars Conference. "Proceedings of the 5th Historic Mortars Conference". International Union of Laboratories and Experts in Construction Materials, Systems and Structures (RILEM), 2019, p. 237-247.
URIhttp://hdl.handle.net/2117/166758
ISBN978-2-35158-221-3
Collections
Share: