The use of mortars in Palau Güell by Antoni Gaudi 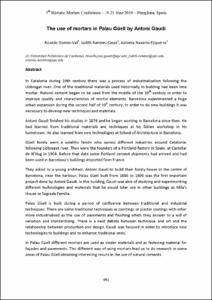 Except where otherwise noted, content on this work is licensed under a Creative Commons license : Attribution-NonCommercial-NoDerivs 3.0 Spain
Abstract
In Catalonia during 19th century there was a process of industrialization following the Llobregat river. One of the traditional materials used historically in building had been lime mortar. Natural cement began to be used from the middle of the 19th century in order to improve quality and characteristics of mortar elements. Barcelona experimented a huge urban expansion during the second half of 19th century. In order to do new buildings it was necessary to develop new techniques and materials. Antoni Gaudi finished his studies in 1876 and he began working in Barcelona since then. He had learned from traditional materials and techniques at his father workshop in his hometown. He also learned from new technologies at School of Architecture in Barcelona. Güell family were a wealthy family who owned different industries around Catalonia, following Llobregat river. They were the founders of a Portland factory in Spain, at Castellar de N’Hug in 1904. Before that date some Portland cement shipments had arrived and had been used in Barcelona’s buildings imported from France. They asked to a young architect, Antoni Gaudi to build their family house in the centre of Barcelona, near the harbour. Palau Güell built from 1886 to 1890 was the first important project done by Antoni Gaudi. In this building, Gaudi was able of studying and experimenting different technologies and materials that he would later use in other buildings as Mila’s House or Sagrada Familia. Palau Güell is built during a period of confluence between traditional and industrial techniques. There are some traditional techniques as paintings or plaster coatings with other more industrialised as the use of pavements and finishing which they answer to a will of seriation and standardizing. There is a neat debate between technique and art and the relationship between production and design. Gaudi was focused in order to introduce new technologies to buildings and to enhance traditional ones. In Palau Güell different mortars are used as binder materials and as fastening material for façades and pavements. This different way of using mortars lead us to do research in some areas of Palau Güell obtaining interesting results in the use of natural cements. This lab research has allowed us to understand the development of mortars by Antoni Gaudi. This research proves how Gaudi was an architect related to traditional techniques but looking to its development through research and experimentation.
Location
1: Unnamed Road, 08024 Barcelona, Espanya
CitationGomez, R. ; Ramirez-Casas, J.; Navarro Ezquerra, A. The use of mortars in Palau Güell by Antoni Gaudi. A: Historic Mortars Conference. "Proceedings of the 5th Historic Mortars Conference". International Union of Laboratories and Experts in Construction Materials, Systems and Structures (RILEM), 2019, p. 901-913.
URIhttp://hdl.handle.net/2117/166741
ISBN978-2-35158-221-3
Collections
Share: