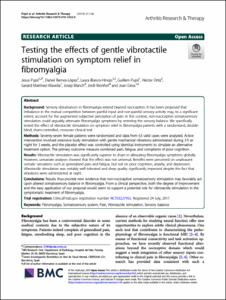 Sensory disturbances in fibromyalgia extend beyond nociception. It has been proposed that imbalance in the mutual competition between painful input and non-painful sensory activity may, to a significant extent, account for the augmented subjective perception of pain. In this context, non-nociceptive somatosensory stimulation could arguably attenuate fibromyalgia symptoms by restoring the sensory balance. We specifically tested the effect of vibrotactile stimulation on symptom relief in fibromyalgia patients with a randomized, double-blind, sham-controlled, crossover clinical trial. Methods Seventy-seven female patients were randomized and data from 63 valid cases were analyzed. Active intervention involved extensive body stimulation with gentle mechanical vibrations administered during 3¿h at night for 3¿weeks, and the placebo effect was controlled using identical instruments to simulate an alternative treatment option. The primary outcome measure combined pain, fatigue, and complaints of poor cognition. Results Vibrotactile stimulation was significantly superior to sham in alleviating fibromyalgia symptoms globally. However, univariate analyses showed that the effect was not universal. Benefits were perceived on unpleasant somatic sensations such as generalized pain and fatigue, but not on poor cognition, anxiety, and depression. Vibrotactile stimulation was notably well tolerated and sleep quality significantly improved despite the fact that vibrations were administered at night. Conclusions Results thus provide new evidence that non-nociceptive somatosensory stimulation may favorably act upon altered somatosensory balance in fibromyalgia. From a clinical perspective, both the degree of improvement and the easy application of our proposal would seem to support a potential role for vibrotactile stimulation in the symptomatic treatment of fibromyalgia.
CitationPujol, J. [et al.]. Testing the effects of gentle vibrotactile stimulation on symptom relief in fibromyalgia. "Arthritis research and therapy", 14 Juny 2019, vol. 21, p. 148-1-148-11.
URIhttp://hdl.handle.net/2117/166654
DOI10.1186/s13075-019-1932-9
ISSN1478-6362
Publisher versionhttps://arthritis-research.biomedcentral.com/articles/10.1186/s13075-019-1932-9