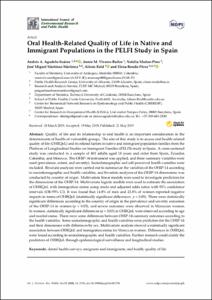 Reid, Alison
Ronda Pérez, Elena
Document typeArticle
Rights accessOpen Access
Abstract
Quality of life and its relationship to oral health is an important consideration in the determinants of health of vulnerable groups. The aim of this study is to assess oral health-related quality of life (OHRQoL) and its related factors in native and immigrant population families from the Platform of Longitudinal Studies on Immigrant Families (PELFI) study in Spain. A cross-sectional study was conducted in a sample of 401 adults aged 18 years and older from Spain, Ecuador, Colombia, and Morocco. The OHIP-14 instrument was applied, and three summary variables were used (prevalence, extent, and severity). Sociodemographic and self-perceived health variables were included. Bivariate analyzes were carried out to summarize the variables of the OHIP-14 according to sociodemographic and health variables, and bivariate analyzes of the OHIP-14 dimensions was conducted by country of origin. Multivariate linear models were used to investigate predictors for the dimensions of the OHIP-14. Multivariate logistic models were used to estimate the association of OHRQoL with immigration status using crude and adjusted odds ratios with 95% confidence intervals (OR-95% CI). It was found that 14.8% of men and 23.8% of women reported negative impacts in terms of OHRQoL (statistically significant differences: p < 0.05). There were statistically significant differences according to the country of origin in the prevalence and severity outcomes of the OHIP-14 in women (p < 0.05), and severe outcomes were observed in Moroccan women. In women, statistically significant differences (p < 0.05) in OHRQoL were observed according to age and marital status. There were some differences between OHIP-14 summary outcomes according to the health variables. Some sociodemographic and health variables were predictors for the OHIP-14 and their dimensions with differences by sex. Multivariate analysis showed a statistically significant association between OHRQoL and immigration status for Moroccan women. Differences in OHRQoL were found according to sociodemographic and health variables. Further research could clarify the predictors of OHRQoL through epidemiological surveillance and longitudinal studies.
CitationAgudelo, A. [et al.]. Oral health-related quality of life in native and immigrant populations in the PELFI study in Spain. "International journal of environmental research and public health", 21 Maig 2019, vol. 16, núm. 10, p. 1796-1-1796-14.
URIhttp://hdl.handle.net/2117/166647
DOI10.3390/ijerph16101796
ISSN1660-4601
Publisher versionhttps://www.mdpi.com/1660-4601/16/10/1796
Collections
Share: