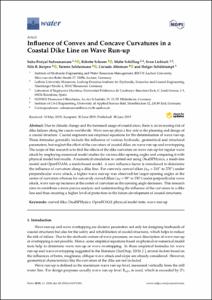 Schüttrumpf, Holger
Document typeArticle
Rights accessOpen Access
ProjectDURCWAVE - amending the Design criteria of URban defences in LECZs through Composite-modelling of WAVE overtopping under climate change scenarios (EC-H2020-792370)
Abstract
Due to climatic change and the increased usage of coastal areas, there is an increasing risk of dike failures along the coasts worldwide. Wave run-up plays a key role in the planning and design of a coastal structure. Coastal engineers use empirical equations for the determination of wave run-up. These formulae generally include the influence of various hydraulic, geometrical and structural parameters, but neglect the effect of the curvature of coastal dikes on wave run-up and overtopping. The scope of this research is to find the effects of the dike curvature on wave run-up for regular wave attack by employing numerical model studies for various dike-opening angles and comparing it with physical model test results. A numerical simulation is carried out using DualSPHysics, a mesh-less model and OpenFOAM, a mesh-based model. A new influence factor is introduced to determine the influence of curvature along a dike line. For convexly curved dikes (ad = 210° to 270°) under perpendicular wave attack, a higher wave run-up was observed for larger opening angles at the center of curvature whereas for concavely curved dikes (ad = 90° to 150°) under perpendicular wave attack, wave run-up increases at the center of curvature as the opening angle decreases. This research aims to contribute a more precise analysis and understanding the influence of the curvature in a dike line and thus ensuring a higher level of protection in the future development of coastal structures.
CitationSubramaniam, S. [et al.]. Influence of convex and concave curvatures in a coastal dike line on wave run-up. "Water", Juliol 2019, vol. 11, núm. 7, p. 1333-1-1333-15.
URIhttp://hdl.handle.net/2117/166590
DOI10.3390/w11071333
ISSN2073-4441
Publisher versionhttps://www.mdpi.com/2073-4441/11/7/1333
Collections
Share: