Towards on line monitoring the evolution of the myocardium infarction scar with an implantable electrical impedance spectrum monitoring system. 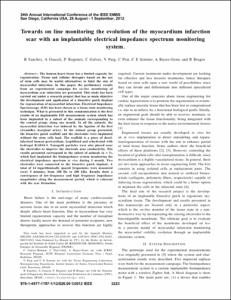 Gálvez-Montón, C.
Puig, V.
Prat-Vidal, C.
Semino, C.E.
Bayés-Genís, Antoni
Document typeConference report
PublisherIEEE
Rights accessOpen Access
Abstract
The human heart tissue has a limited capacity for regeneration. Tissue and cellular therapies based on the use of stem cells may be useful alternatives to limit the size of myocardial infarction. In this paper, the preliminary results from an experimental campaign for on-line monitoring of myocardium scar infarction are presented. This study has been carried out under a research project that has as main objective the development and application of a bioactive patch implant for regeneration of myocardial infarction. Electrical Impedance Spectroscopy (EIS) has been chosen as a tissue state monitoring technique. What is presented in this communication is the first results of an implantable EIS measurement system which has been implanted in a subset of the animals corresponding to the control group, along one month. In all the animals, the myocardial infarction was induced by the ligation of the first circumflex marginal artery. In the animal group presented,the bioactive patch scaffold and the electrodes were implanted without the stem cells load. The scaffold is a piece of decellularized human pericardium, lyophilized and rehydrated with hydrogel RAD16-I. Nanogold particles were also placed near the electrodes to improve the electrode area conductivity. The results presented correspond to the subset of animals (n = 5), which had implanted the bioimpedance system monitoring the electrical impedance spectrum in vivo during 1 month. Two electrodes were connected to the bioactive patch implant. A total of 14 logarithmically spaced frequencies were measured every 5 minutes, from 100 Hz to 200 kHz. Results show a convergence of low-frequency and high frequency impedance magnitudes along the measurement period, which is coherent with the scar formation.
CitationSánchez, B. [et al.]. Towards on line monitoring the evolution of the myocardium infarction scar with an implantable electrical impedance spectrum monitoring system.. A: IEEE Engineering in Medicine and Biology Society. "2012-34th Annual International Conference of the IEEE EMBS". San Diego, California: IEEE, 2012, p. 3223-3226.
URIhttp://hdl.handle.net/2117/16651
ISBN978-1-4577-1787-1
Collections
Share: