Modulating Fatty Acid Epoxidation vs Hydroxylation in a Fungal Peroxygenase 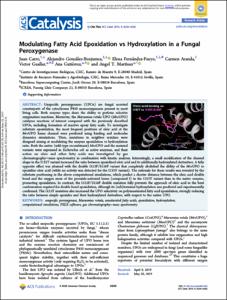 Gutiérrez, Ana
Martínez, Angel T.
Document typeArticle
PublisherAmerican Chemical Society
Rights accessOpen Access
ProjectSusBind - Development and pilot production of SUStainable bio BINDer systems for wood based panels (EC-H2020-792063)
GENOMAS DE BASIDIOMICETOS PARA LAS BIORREFINERIAS DE LIGNOCELULOSA (AEI-BIO2017-86559-R)
Abstract
Unspecific peroxygenases (UPOs) are fungal secreted counterparts of the cytochrome P450 monooxygenases present in most living cells. Both enzyme types share the ability to perform selective oxygenation reactions. Moreover, the Marasmius rotula UPO (MroUPO) catalyzes reactions of interest compared with the previously described UPOs, including formation of reactive epoxy fatty acids. To investigate substrate epoxidation, the most frequent positions of oleic acid at the MroUPO heme channel were predicted using binding and molecular dynamics simulations. Then, mutations in neighbor residues were designed aiming at modulating the enzyme epoxidation vs hydroxylation ratio. Both the native (wild-type recombinant) MroUPO and the mutated variants were expressed in Escherichia coli as active enzymes, and their action on oleic and other fatty acids was investigated by gas chromatography–mass spectrometry in combination with kinetic analyses. Interestingly, a small modification of the channel shape in the I153T variant increased the ratio between epoxidized oleic acid and its additionally hydroxylated derivatives. A fully opposite effect was attained with the double I153F/S156F variant that completely abolished the ability of the MroUPO to epoxidize oleic acid (while no activity was detected for the I153V variant). The rationale for these results was revealed by the substrate positioning in the above computational simulations, which predict a shorter distance between the oleic acid double bond and the oxygen atom of the peroxide-activated heme (compound I) in the I153T variant than in the native enzyme, promoting epoxidation. In contrast, the I153F/S156F double mutation fully prevents the approach of oleic acid in the bent conformation required for double-bond epoxidation, although its (sub)terminal hydroxylation was predicted and experimentally confirmed. The I153T mutation also increased the UPO selectivity on polyunsaturated fatty acid epoxidation, strongly reducing the ratio between simple epoxides and their hydroxylated derivatives, with respect to the native UPO.
CitationCarro, J. [et al.]. Modulating Fatty Acid Epoxidation vs Hydroxylation in a Fungal Peroxygenase. "ACS Catalysis", 14 Juny 2019, vol. 9, núm. 7, p. 6234-6242.
URIhttp://hdl.handle.net/2117/166459
DOI10.1021/acscatal.9b01454
ISSN2155-5435
Publisher versionhttps://pubs.acs.org/doi/full/10.1021/acscatal.9b01454
Collections
Share: