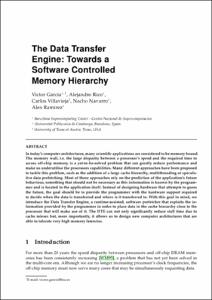 Document typeConference lecture
Rights accessOpen Access
Abstract
In today’s computer architectures, many scientific applications are considered to be memory bound. The memory wall, i.e. the large disparity between a processor’s speed and the required time to access off-chip memory, is a yet-to-be-solved problem that can greatly reduce performance and make us underutilise the processors capabilities. Many different approaches have been proposed to tackle this problem, such as the addition of a large cache hierarchy, multithreading or speculative data prefetching. Most of these approaches rely on the prediction of the application’s future behaviour, something that should not be necessary as this information is known by the programmer and is located in the application itself. Instead of designing hardware that attempts to guess the future, the goal should be to provide the programmer with the hardware support required to decide when the data is transferred and where is it transferred to. With this goal in mind, we introduce the Data Transfer Engine, a runtime-assisted, software prefetcher that exploits the information provided by the programmer in order to place data in the cache hierarchy close to the processor that will make use of it. The DTE can not only significantly reduce stall time due to cache misses but, more importantly, it allows us to design new computer architectures that are able to tolerate very high memory latencies.
CitationAmiri Nezhad, M. [et al.]. Should next generation wireless mesh networks consider dynamic channel access?. A: Baltic Congress on Future Internet Communications. "2nd Baltic Congress on Future Internet Communications, 25-27 April 2012, Vilnius, Lithuania". Vilnius: 2012, p. 32-39.
URIhttp://hdl.handle.net/2117/16643
DOI10.1109/BCFIC.2012.6217976
ISBN978-146731671-2
Collections
Share: