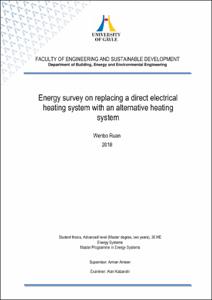 Show full item record
Ruan, Wenbo
Tutor / directorAmeen, Arman
CovenanteeHögskolan i Gävle
Document typeMaster thesis
Rights accessOpen Access
Abstract
With the ever-growing energy demand that world is currently going through and the danger of climate change around the corner, wagering in renewable energy seems to be the right path to create a more smart and green future. Sweden has put great effort on decreasing its dependency on oil, in fact in 2012 more than 50 % of its electricity came from the renewable source and has a plan in making it 100 % in 2040. However, when it comes to heating systems Sweden depends greatly on district heating, and situations which buildings are located outside the district heating system’s reach is not uncommon, hence for those buildings, other options such as solar power or heat pumps are considered. Many buildings located in Skutskär suffer from the problem stated above. The particular building analyzed in this thesis uses electrical radiator and furnace as sources of heat, which implies high energy uses and financial expenses. For this reason technical and financial analysis of using each alternative system for a single family house located in Skutskär had been done. Using solar powered system is deemed to be quite ineffective, as Sweden has poor solar radiation. In order to compensate the poor sun hours during the winter, 51 photovoltaic (PV) panels or 19 solar thermal panels would be required. This high initial investment needs long period of time in order to be profitable, 15 years for solar thermal system and 21 years for solar PV system. On the other hand, the results from the heat pumps are quite satisfactory, the fastest payback period is around 4 years. This is achieved by using air source heat pump (ASHP), the annual saving in this case is three times higher than using solar photovoltaic panels, making the usage of ASHP more attractive than any solar energy system. However, when annual saving is concerned, the ground source heat pump (GSHP) system is capable of generating even higher saving, but the initial investment is significantly higher, extending the payback period to 6 years
SubjectsSweden -- Environmental aspects, Heat pumps, Renewable energy sources, Suècia -- Aspectes ambientals, Bombes de calor, Energies renovables
DegreeMÀSTER UNIVERSITARI EN ENGINYERIA INDUSTRIAL (Pla 2014)
Location
1: 781 99 Idkerberget, Suècia
URIhttp://hdl.handle.net/2117/166325
Collections
Share: