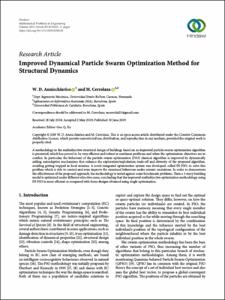 Document typeArticle
Rights accessOpen Access
Abstract
A methodology to the multiobjective structural design of buildings based on an improved particle swarm optimization algorithm is presented, which has proved to be very efficient and robust in nonlinear problems and when the optimization objectives are in conflict. In particular, the behaviour of the particle swarm optimization (PSO) classical algorithm is improved by dynamically adding autoadaptive mechanisms that enhance the exploration/exploitation trade-off and diversity of the proposed algorithm, avoiding getting trapped in local minima. A novel integrated optimization system was developed, called DI-PSO, to solve this problem which is able to control and even improve the structural behaviour under seismic excitations. In order to demonstrate the effectiveness of the proposed approach, the methodology is tested against some benchmark problems. Then a 3-story-building model is optimized under different objective cases, concluding that the improved multiobjective optimization methodology using DI-PSO is more efficient as compared with those designs obtained using single optimization.
CitationAnnicchiarico, W.; Cerrolaza, M.E. Improved dynamical particle swarm optimization method for structural dynamics. "Mathematical problems in engineering", Juny 2019, vol. 2019, p. 8250185-1-8250185-11.
URIhttp://hdl.handle.net/2117/166311
DOI10.1155/2019/8250185
ISSN1024-123X
Publisher versionhttps://www.hindawi.com/journals/mpe/2019/8250185/
Collections
Share: