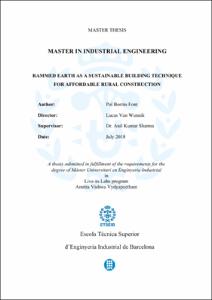 Except where otherwise noted, content on this work is licensed under a Creative Commons license : Attribution-NonCommercial-NoDerivs 3.0 Spain
Abstract
Around the world, especially in rural areas, the most disadvantaged continue not to have access to proper house. Building environment has been stated as one of the main factors for health. Homeless people or those without appropriate one have 20 years less of life expectance and suffer 2 to 50 times more health issues than the rest of the population according to Doctors Without Borders. Housing has also influence in general wellbeing and is an indicator of development. With the best purposes, governments, organizations and institutions have been finding ways to provide homes to different regions for the most needed. Despite all those efforts Habitat for Humanity estimated in 2015 that 1,6 billion of people around the world live in an “inadequate shelter”. Most of them live in rural areas so they have attired the attention in the last past years. Furthermore, those organizations do not pay attention in the specific necessities such as the suitability of the proposed housing with the climate, or the integration of those new homes into the existing aggrupation. The initiatives usually consist to provide a few prototypic dwellings per zones, limited by the budget. This thesis presents the process done so far, inside a project with the main objective to provide the rural village of Dewgain the knowledge of a new building tool technique, suitable to their specific necessities and climates, to empower the community people and make them actors of their own development. It is also continuity to the project initiated by the architect student Nicole C. Little from the University at Buffalo in collaboration with Live-in-Labs program of Amrita Vishwa Vidyapeetham. From her work Rammed Earth was designated as one of the possible solutions. My participation in the project was initiated with one visit at the village, which was conducted for data and soil collection for analysis. The methodology and analysis are presented, which were set as a base to start designing the solution. Based on the literature review, the analysis of the Dewgain soil was done to determine its suitability for the type of soil construction selected. Also a stabilizer was defined through methodic testing. Since the project team had any experience on this kind of construction, a second visit was effectuate at the heart of the earth construction in India, Auroville (Tamil Nadu). The visit served up to get some advices for RE construction but also to know about alternative solutions for flooring and roofing. Finally, a RE building prototype was designed and executed in the Ettimadai university campus of Amrita Vishwa Vidyapeetham as a previous stage to its application in Dewgain village, considering that it was necessary as a demonstration of the technique viability, but also as a testing site to proof its theoretical excellent properties.
SubjectsSustainable construction -- India, Construcció sostenible -- Índia
DegreeMÀSTER UNIVERSITARI EN ENGINYERIA INDUSTRIAL (Pla 2014)
Location
1: Dewgain, Jharkhand 834010, Índia
URIhttp://hdl.handle.net/2117/166309
Collections
Share: