Design and building of new softball sports equipment in Barcelona: the last intervention in the Olympic Area of Historical Mountain of Montjuic 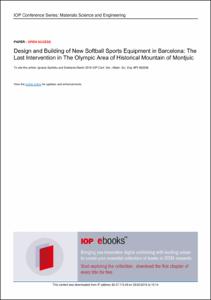 Design and Building of New Softball Sports Equipment in Barcelona: The Last Intervention in The Olympic Area of Historical Mountain of Montjuic (2,995Mb)
Share:

Except where otherwise noted, content on this work is licensed under a Creative Commons license : Attribution 3.0 Spain
Abstract
After the designation of Barcelona as an Olympic city in 1992, a process of fervent reconstruction and transformation of the city began. For the development of the games, four strategic zones of the city were chosen, destined to the achievement of sporting events. One of these places was the historic mountain of Montjuïc that hosted the largest sports complex in the city in an architectural and urban macro-project called "Anella Olímpica". After 25 years, Barcelona continues to rebuild the mountain, adapting it to the new requirements with regard to sports facilities and this is how the Softball Barcelona project came about. The design criteria of this equipment have been: The use of the site's characteristics, the easy communication with the current Baseball, the proper visibility of the field by the public, essentially familiar, the introduction of innovative elements that add value to the installation, and a certain visibility and quality of the installation that does not disregard the magnificent environment, in the most important concentration of sports facilities throughout the country. Other criteria have been: The use of land as a consequence of the construction of the field, the possibility of organizing future events of a certain magnitude, the economy of the media, this new softball field is located next to the current Baseball Olympic Field to the east, under the Olympic Ring, in Montjuïc. The main element is a Marquee, based on six inclined metallic "pillars" that support a structure and also allow the placement of another horizontal network, which serves as security as to configure an awning, very convenient due to the orientation to south. These porticos that form the same curvature on the ground that the track, will support the vertical protection network, and will also be able to accommodate the access lighting and will serve as support for the awning-net. This structure configures the image of the field since it will be seen from the street Pierre de Coubertin.
CitationSanfeliu, I.; Martin, E. Design and building of new softball sports equipment in Barcelona: the last intervention in the Olympic Area of Historical Mountain of Montjuic. "IOP conference series: materials science and engineering", 25 Febrer 2019, vol. 471, núm. 7, p. 1-10.
URIhttp://hdl.handle.net/2117/166273
DOI10.1088/1757-899X/471/8/082038
ISSN1757-899X
Publisher versionhttps://iopscience.iop.org/article/10.1088/1757-899X/471/8/082038/meta
Collections
Share: