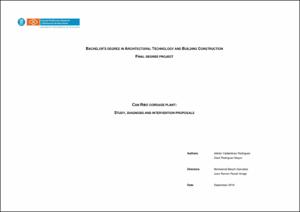 Tipo de documentoTrabajo final de grado
Condiciones de accesoAcceso abierto
Resumen
The objective of the project is the study of the old cordage Can Ribó, located in the city of Badalona, in order to know how it has evolved and grow throughout its years of history, to know a little more this unknown historical building by the population and know their current status in order to perform an intervention in order to adapt and maintain the current facilities. For the realization of this project, it has been tried from the beginning to use the BIM tool through the Revit program of Autodesk in order to verify its use as a main tool or support in this type of projects. Since one of the most important parts for us was to know the original status and the history of the building and the factory, the first thing we did was look in the administrative, historical and photographic archives of the city of Badalona, for which several days were invested of information search in the Badalona museum mainly. In conjunction with the search for historical information, the preparation of the plans of the building was carried out, for which continuous visits were made to the building given the ease of access on our part, as one of the members of this working group of the tenant company. Once the basic preparation of building plans was carried out, a series of interviews were conducted with the people who carried out the different works in the building since the 80s, in order to know in depth the different construction systems. Once the operation of the building was known, we proceeded to analyse the damage found in it, for this, a series of photographs were taken, and thanks to the help of the BIM tool it was possible to deduce in part the origin of the injuries, but above all, thanks to the day-to-day experience during years of use of the building. When we’re collecting all the data and carrying out the pertinent diagnosis, a series of interventions is proposed in order to lengthen the life of the building and improve the day to day of the users.
MateriasIndustrial buildings, Cordelería Ribó (Badalona, Catalunya), Edificis industrials -- Catalunya -- Badalona
Localización
1: Pomar de Baix - Pompeu Fabra, 08911 Badalona, Barcelona, Espanya
URIhttp://hdl.handle.net/2117/166222
Colecciones
Comparte: