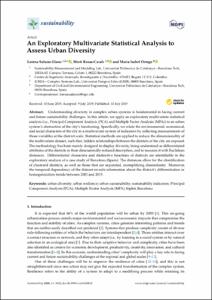 Except where otherwise noted, content on this work is licensed under a Creative Commons license : Attribution 4.0 International
Abstract
Understanding diversity in complex urban systems is fundamental in facing current and future sustainability challenges. In this article, we apply an exploratory multivariate statistical analysis (i.e., Principal Component Analysis (PCA) and Multiple Factor Analysis (MFA)) to an urban system’s abstraction of the city’s functioning. Specifically, we relate the environmental, economical, and social characters of the city in a multivariate system of indicators by collecting measurements of those variables at the district scale. Statistical methods are applied to reduce the dimensionality of the multivariate dataset, such that, hidden relationships between the districts of the city are exposed. The methodology has been mainly designed to display diversity, being understood as differentiated attributes of the districts in their dimensionally-reduced description, and to measure it with Euclidean distances. Differentiated characters and distinctive functions of districts are identifiable in the exploratory analysis of a case study of Barcelona (Spain). The distances allow for the identification of clustered districts, as well as those that are separated, exemplifying dissimilarity. Moreover, the temporal dependency of the dataset reveals information about the district’s differentiation or homogenization trends between 2003 and 2015.
CitationSalazar-Llano, L.; Rosas-Casals, M.; Ortego, M.I. An Exploratory Multivariate Statistical Analysis to Assess Urban Diversity. "Sustainability", 11 Juliol 2019, vol. 11, núm. 14, p. 3812-1-3812-27.
URIhttp://hdl.handle.net/2117/166182
DOI10.3390/su11143812
ISSN2071-1050
Publisher versionhttps://www.mdpi.com/2071-1050/11/14/3812
Collections
Share: