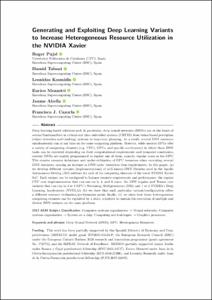 Abstract
Deep learning-based solutions and, in particular, deep neural networks (DNNs) are at the heart of several functionalities in critical-real time embedded systems (CRTES) from vision-based perception (object detection and tracking) systems to trajectory planning. As a result, several DNN instances simultaneously run at any time on the same computing platform. However, while modern GPUs offer a variety of computing elements (e.g. CPUs, GPUs, and specific accelerators) in which those DNN tasks can be executed depending on their computational requirements and temporal constraints, current DNNs are mainly programmed to exploit one of them, namely, regular cores in the GPU. This creates resource imbalance and under-utilization of GPU resources when executing several DNN instances, causing an increase in DNN tasks' execution time requirements. In this paper, (a) we develop different variants (implementations) of well-known DNN libraries used in the Apollo Autonomous Driving (AD) software for each of the computing elements of the latest NVIDIA Xavier SoC. Each variant can be configured to balance resource requirements and performance: the regular CPU core implementation that can run on 2, 4, and 6 cores; the GPU regular and Tensor core variants that can run in 4 or 8 GPU's Streaming Multiprocessors (SM); and 1 or 2 NVIDIA's Deep Learning Accelerators (NVDLA); (b) we show that each particular variant/configuration offers a different resource utilization/performance point; finally, (c) we show how those heterogeneous computing elements can be exploited by a static scheduler to sustain the execution of multiple and diverse DNN variants on the same platform.
CitationPujol, R. [et al.]. Generating and Exploiting Deep Learning Variants to Increase Heterogeneous Resource Utilization in the NVIDIA Xavier. A: 31st Euromicro Conference on Real-Time Systems (ECRTS 2019). "31st Euromicro Conference on Real-Time Systems (ECRTS 2019)". 2019.
URIhttp://hdl.handle.net/2117/166069
DOI10.4230/LIPIcs.ECRTS.2019.23
ISBN978-3-95977-110-8
ISSN1868-8969
Publisher versionhttp://drops.dagstuhl.de/opus/volltexte/2019/10760/
Collections
Share: