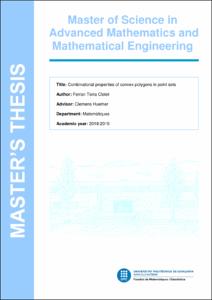 Except where otherwise noted, content on this work is licensed under a Creative Commons license : Attribution-NonCommercial-NoDerivs 3.0 Spain
Abstract
The Erd&#337;s-Szekeres theorem is a famous result in Discrete geometry that inspired a lot of research and motivated new problems. The theorem states that for every integer n &#8805; 3 there is another integer N_0 such that any set of N &#8805; N_0 points in general position in the plane contains the vertex set of a convex n-gon. Related is the question on the number of empty (without interior points) convex k-gons, X_k, in a set of n points, for k=3,4,5,... . A known result states that the alternating sum of the X_k's only depends on the number n of points, but not on the precise positions of the points. A proof was given by Pinchasi, Radoi&#269;i&#263;, and Sharir in 2006. In this thesis we extend this result to the numbers of convex k-gons with l interior points, X_{k,l}, and provide several formulas involving these numbers. All these formulas only depend on the number n of points of the set. The proofs are based on a continuous motion argument. We further show that with this proof technique at most n-2 linearly independent equations for the X_{k,l}'s can be obtained and we provide n-2 such equations. We also obtain several other formulas, building upon a work by Huemer, Oliveros, Pérez-Lantero, and Vogtenhuber. The obtained formulas could further be useful to solve some open problems related to the Erd&#337;s-Szekeres theorem. This thesis also surveys several known results and questions related to this classical problem for point sets in the plane.
SubjectsDiscrete geometry, Geometria discreta
DegreeMÀSTER UNIVERSITARI EN MATEMÀTICA AVANÇADA I ENGINYERIA MATEMÀTICA (Pla 2010)
URIhttp://hdl.handle.net/2117/166052
Collections
Share: