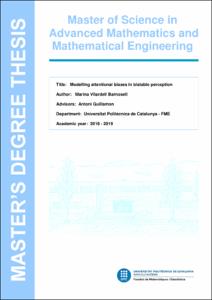 Document typeMaster thesis
Rights accessOpen Access
Abstract
Binocular rivalry is a type of bistable perception phenomena that arises when the eyes are unable to combine ambiguous stimuli into a unique image. It promotes a competition process between the visual interpretations received, in the form of oscillations between dominant and suppressed states. Recent research has suggested that, in binocular rivalry, visual attention is an external factor that influences the dynamics behind the perception of stimuli. This thesis will discuss the effect of attention in an extended version of Curtu et al.'s binocular rivalry model by analysing the way in which recurrent excitatory inputs applied on neurons change how stimuli are perceived. By analysing the relationship between a self-recurrent excitation term, the input strength and the inhibition parameter through bifurcation and two-parameter diagrams, we concluded that attention has a direct effect on frequency dynamics; promoting faster oscillatory regimes as well as the achievement of Winner-Take-All behaviours through release and escape mechanisms.
SubjectsBiology, Natural history, Biologia, Ciències naturals
URIhttp://hdl.handle.net/2117/166019
Collections
Share: