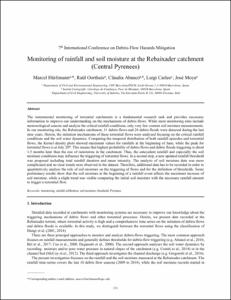 The instrumental monitoring of torrential catchments is a fundamental research task and provides necessary information to improve our understanding on the mechanisms of debris flows. While most monitoring sites include meteorological sensors and analyze the critical rainfall conditions, only very few contain soil moisture measurements. In our monitoring site, the Rebaixader catchment, 11 debris flows and 24 debris floods were detected during the last nine years. Herein, the initiation mechanisms of these torrential flows were analyzed focusing on the critical rainfall conditions and the soil water dynamics. Comparing the temporal distribution of both rainfall episodes and torrential flows, the Kernel density plots showed maximum values for rainfalls at the beginning of June, while the peak for torrential flows is at July 20th. This means that highest probability of debris flows and debris floods triggering is about 1.5 months later than the one of rainstorms in the catchment. Thus, the antecedent rainfall and especially the soil moisture conditions may influence the triggering of torrential flows. In a second step, a new updated rainfall threshold was proposed including total rainfall duration and mean intensity. The analysis of soil moisture data was more complicated and no clear trends were observed in the dataset. Therefore, additional data has to be recorded in order to quantitatively analyze the role of soil moisture on the triggering of flows and for the definition of thresholds. Some preliminary results show that the soil moisture at the beginning of a rainfall event affects the maximum increase of soil moisture, while a slight trend was visible comparing the initial soil moisture with the necessary rainfall amount to trigger a torrential flow.
CitationHurlimann, M. [et al.]. Monitoring of rainfall and soil moisture at the Rebaixader catchment (Central Pyrenees). A: International Conference on Debris-Flow Hazards Mitigation. "Debris-Flow Hazards Mitigation: Mechanics, Monitoring, Modeling, and Assessment: proceedings of the Seventh International Conference on Debris-Flow Hazards Mitigation, Golden, Colorado, Usa, June 10-13, 2019". Association of Environmental & Engineering Geologists (AEG), 2019, p. 131-137.
URIhttp://hdl.handle.net/2117/165876
ISBN978-0-578-51082-8
Publisher versionhttps://hdl.handle.net/11124/173051