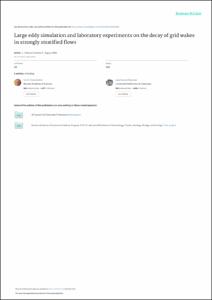 Show full item record
Fraunie, P.
Chashechkin, Y.
Redondo Apraiz, José Manuel
Velasco Montes, David
Rayo Berreba, S.
Document typeArticle
Rights accessOpen Access
Abstract
A detailed analysis of the flow structure resulting from the combination of turbulence and internal waves is carried out and visualized by means of the Schlieren method on waves in a strongly stratified fluid at the Laboratory of the IPM in Moscow. The joint appearance of the more regular internal wave oscillations and the small-scale turbulence that is confined vertically to the Ozmidov length scale favours the use of a simple geometrical analysis to investigate their time-space span and evolution. This provides useful information on the collapse of internal wave breaking processes in the ocean and the atmosphere. The measurements were performed under a variety of linear stratifications and different grid forcing scales, combining the grid wake and velocity shear. A numerical simulation using LES on the passage of a single bar in a linearly stratified fluid medium has been compared with the experiments identifying the different influences of the environmental agents on the actual effective vertical diffusion of the wakes. The equation of state, which connects the density and salinity, is assumed to be linear, with the coefficient of the salt contraction being included into the definition of salinity or heat. The characteristic internal waves as well as the entire beam width are related to the diameter of the bar, the Richardson number and the peak-to-peak value of oscillations. The ultimate frequency of the infinitesimal periodic internal waves is limited by the maximum buoyancy frequency relating the decrease in the vertical scale with the anisotropy of the velocity turbulent r.m.s. velocity.
CitationFraunie, P. [et al.]. Large eddy simulation and laboratory experiments on the decay of grid wakes in strongly stratified flows. "Nuovo cimento della Società Italiana di Fisica C. Geophysics and space physics", 27 Juliol 2009, vol. 31, núm. 5-6, p. 909-930.
URIhttp://hdl.handle.net/2117/165854
DOI10.1393/ncc/i2009-10359-x
ISSN0390-5551
Collections
Share: