Harmonic distance in intervals and chords 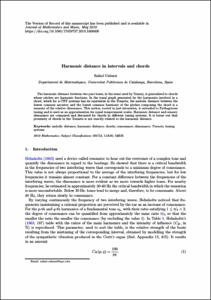 Except where otherwise noted, content on this work is licensed under a Creative Commons license : Attribution-NonCommercial-NoDerivs 3.0 Spain
Abstract
The harmonic distance between two pure tones, in the sense used by Tenney, is generalised to chords whose pitches are harmonic fractions. In the tonal graph generated by the harmonics involved in a chord, which for n-TET systems has its equivalent in the Tonnetz, the melodic distance between the lowest common ancestor and the lowest common harmonic of the pitches composing the chord is a measure of the relative dissonance. This notion, rooted in just intonation, is extended to Pythagorean tuning and is used as an approximation for equal temperament scales. Harmonic distance and sensory dissonance are compared and discussed for chords in different tuning systems. It is borne out that proximity of chords in the Tonnetz is not exactly related to the harmonic distance.
Description
This is an Accepted Manuscript of an article published by Taylor &amp; Francis Group in Journal of Mathematics and Music on 15 of may 2019, available online at: http://www.tandfonline.com/10.1080/17459737.2019.1608600.
CitationCubarsi, R. Harmonic distance in intervals and chords. "JOURNAL OF MATHEMATICS AND MUSIC", 1 Maig 2019, vol. 13, núm. 1, p. 86-106.
URIhttp://hdl.handle.net/2117/165833
DOI10.1080/17459737.2019.1608600
ISSN1745-9745
Publisher versionhttps://www.tandfonline.com/doi/abs/10.1080/17459737.2019.1608600
Collections
Share: