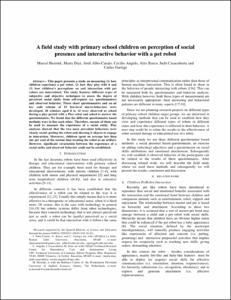 Except where otherwise noted, content on this work is licensed under a Creative Commons license : Attribution-NonCommercial-NoDerivs 3.0 Spain
Abstract
This paper presents a study on measuring (1) how children experience a pet robot, (2) how they play with it and (3) how children’s perceptions on and interaction with pet robots are interrelated. The study features different types of subjective and objective techniques to assess the degree of perceived social entity from self-reports (i.e. questionnaires) and observed behavior. Three short questionnaires and an ad hoc code scheme of 15 low-level micro-behaviors were developed. 28 scholars aged 8 to 12 were observed at school during a play period with a Pleo robot and asked to answer the questionnaires. We found that the different questionnaire based methods were in line each other. Therefore, anyone of them can be used to measure the experience of a social entity. Play analyses showed that the two most prevalent behaviors were clearly social: petting the robot and showing it objects to engage in interaction. Moreover, children spent on average less than one per cent of the session time treating the robot as an artifact. However, significant covariation between the experience of a social entity and observed behavior could not be established.
CitationHeerink, M. [et al.]. A field study with primary school children on perception of social presence and interactive behavior with a pet robot. A: IEEE International Symposium on Robot and Human Interactive Communication. "RO-MAN 2012". Paris: 2012.
URIhttp://hdl.handle.net/2117/16581
ISBN978-1-4673-4605-4
Collections
Share: