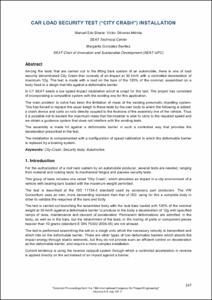 Document typeConference lecture
Rights accessOpen Access
Abstract
Among the tests that are carried out to the lifting bars system of an automobile, there is one of load security denominated City Crash that consists of an impact at 30 km/h with a controlled deceleration of maximum 12g. The test is made with a load on the bars of the 120% of the nominal, assembled on a body fixed to a sleigh that hits against a deformable barrier. In CT SEAT exists a low speed impact installation which is unapt for this test. The project has consisted of incorporating a compatible system with the existing one for this application. The main problem to solve has been the limitation of mass of the existing pneumatic impelling system. This has forced to replace the usual sleigh in these tests by the own body to which the following is added: a crash device and carts on rails directly coupled to the fixations of the assembly line of the vehicle. Thus it is possible not to exceed the maximum mass that the impeller is able to carry to the required speed and we obtain a guidance system that does not interfere with the existing tests. The assembly is made hit against a deformable barrier in such a controlled way that provides the deceleration prescribed in the test. The installation is complemented with a configuration of speed calibration in which the deformable barrier is replaced by a braking system.
CitationEdo, M.; Oliveras, V.; González, M. Car load security test ("City Crash") installation. A: International Congress on Project Engineering. "Selected proceedings from the 15th International Congress on Project Engineering". Huesca: 2011, p. 247-256.
URIhttp://hdl.handle.net/2117/16569
ISBN978-84-615-7674-6
Collections
Share: